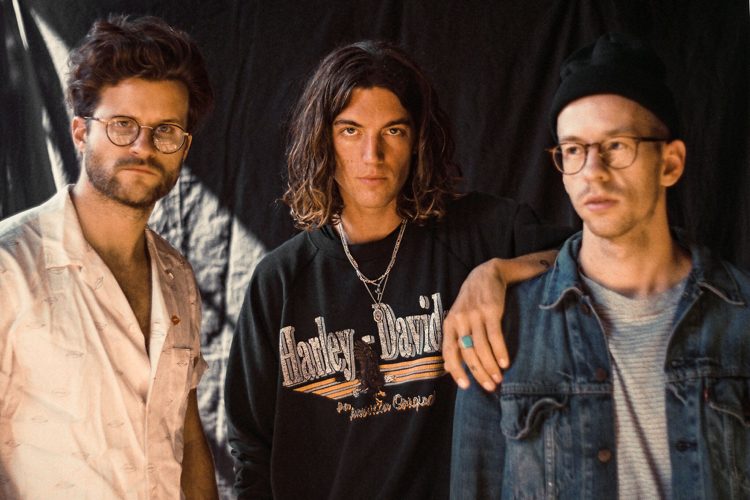 Photo supplied by The Label NZ.

Indie pop band LANY (pronounced lay-nee) are like a shooting star. They’ve blown up so fast, it seems like if you blink you might miss them. Which would suck, because what you’d miss are dreamy pop hooks, smooth moody vocals, and minimalist electronic sounds – a combination that produces unique summery vibes and captures many hearts.

Comparable to the likes of John Mayer, Halsey, Frank Ocean and The 1975, LANY came together in 2014 with the aim of producing just a couple of their own tracks. Before they knew it, they were catapulted to centre stage, with a mass online following and labels dying to sign them. What resulted has since been four extended plays, 100+ shows, and a self-titled debut album and New Zealand show coming oh so soon.

TEARAWAY’s Dana got a chance to speak with lead singer Paul Klein about his current favourite musicians, having young people as an audience, the lows of touring, and more.

Hiya Paul! Thanks for taking the time to speak with us today. What have you been up to today, whereabouts are you?

Cheers, I’m good, just doing lots of interviews, one after the other. I’m in Los Angeles.

What have you been listening to at the moment, are there any latest music releases that have caught your eye, or your ears I should say?

Yeah, I’m obsessed with Frank Ocean, I just really love the song Biking that he put out about a month ago with Jay Z and Tyler. I’ve been listening to Blonde, top to bottom. I love Chance [The Rapper], we were just at Hangout Festival which is this big festival in Alabama, and Chance played and I got to see him. There’s this band called The Night Game, the lead singer is from the pop punk band Boys Like Girls, and they have this song called The Outfield that sounds a lot like the 80s band The Outfield; it’s pretty cool. And last but not least, Post Malone is like my guilty pleasure, he has this song called Candy Paint, which is on the Fast and Furious soundtrack, Fast and Furious 45 or however many there are. (laughs)

You guys started out by putting out two self-produced tracks online. Have you worked in a studio for your upcoming debut album, or do you stick to being relatively DIY?

We made the album the same way we made everything in the past. All home style. I don’t know, we wouldn’t even know what to do in a studio. Everything went through the Dell computer that we are known for making our stuff on. We just kind of do it ourselves, ya know.

A lot of your songs embrace a very Californian summer aesthetic. What is it in particular about Los Angeles that really strikes a cord with you for you to want to put those vibes into song?

I’m not sure, I think it happens pretty subconsciously. Obviously there are times that I’m pretty blatant about California, like I’ll actually say California or make a California reference. But I think it just happens pretty naturally. It’s not my hometown, but this is my home. I’ve been here for like 3 years. I’ve always been enamoured and fascinated by Los Angeles. It sounds cheesy but like all of my dreams came true when I moved here. It sounds cliché but it doesn’t happen to many people, normally dreams crumble.

The audience for LANY is primarily the millennial generation. Do you think there are any advantages or disadvantages to this? How do you feel about the way people view young people and their relationship to music?

I would be so worried if young people didn’t like our music! I would be like, we suck, I quit. (laughs) I can’t imagine not appealing to young people and having that sort of fan base, I don’t really know why people shit on us and people our age. It’s been amazing, the only reason I’m on the phone with you right now is because of young people. And plus, they are so much more fun to play for. The unfortunate reality is people get suckier the longer they live on Earth, so it’s cool to have all the young kids who still believe in love and life and dreams.

Not many bands come all the way over to New Zealand, so we really appreciate you making the trek over the ditch for your Auckland show on July 26th! What is the best and worst thing about performing live?

The worst part about it is that most people don’t understand how hard touring is. I’ve been home 3 nights since February 21st. I sleep in like a coffin on a tour bus, you wake up in a new city every day, you have to bust out water bottles to brush your teeth, if you want to walk off the bus there’s 200 people there waiting for you who I hate saying no to, everything is an inconvenience. It’s exhausting. But I want you to know that us coming to New Zealand is so important to us. We can’t wait to be over there. I know that it’s a big plane flight but we are gladly taking it. There’s no substitute. You’re not going to hear a lot of LANY songs on the radio, we’re not a radio pop band, we’re not going to live and die on radio, we do shows. That’s how we make our money, that’s how we reach more people, that’s what we love to do. That’s the best part about it, to just watch a fan base have fun and grow.

Check out more of our interviews with the stars of the music world!

Panic! at the Disco’s Brendon Urie

Kurisú: It’s all About the Story

Being Honest with Iris G