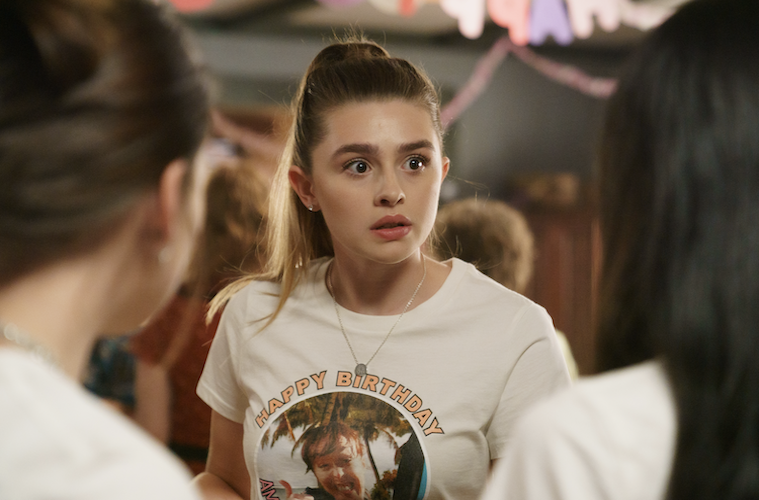 In Conversation with Mystic’s Antonia Robinson

The new season of TV series Mystic has launched and we caught up with actress Antonia Robinson to chat about her character Natasha, behind-the-scenes highlights, and the key life themes she hopes people can take away from watching season three.

Congrats on the season three launch of Mystic! Can you share with us a bit about the character you play on the show?

I play Natasha, a feisty but local teen who loves her friends nearly as much as she loves her horse! She’s been through so much with the gang, and throughout the ups and downs Natasha has grown in her friendships and as a person. She’s smart, witty, and most of all doesn’t let people mess her around. She’s a talented communicator who has a passion for business and hopes to one day become an entrepreneur! And I secretly think she’s her own role model.

The series is based on New Zealand author Stacy Gregg’s bestselling book series Pony Club Secrets. When the plans for the TV adaption came out, what attracted you to the script for the Mystic series?

As a young teenager I adored the Pony Club Secrets books, I even remember being on the waitlist for the books at the library! When I got the audition I could hear the young Antonia screaming with excitement as I had always thought it would make an epic TV show. The characters are written with integrity, passion, and a truth that makes them relatable and loveable. I knew that the characters would resonate with so many people watching the show, and I feel honoured to have been a part of the process.

The Mystic series takes on some key life themes and issues including environmental – what do you hope people can take away from this season?

This season delves into family dynamics, relationships, and the environment in a way that shows teens how to tackle such big topics. A key takeaway is the importance of communication, and that being open and honest with your friends is the best way to get things done. They band together to stop the trawler, and it is through teamwork that they succeed. Sometimes the enormity of current world issues can feel too hard to tackle, or like you are too small to make a change, but anything is possible when you work together and solve the problem step by step.

Do you have a highlight or behind-the-scenes moment you could share with us from filming season three of Mystic?

So much of season three was a highlight, we had the most amazing time shooting on location. Filming in Summer made for the most beautiful sunsets and every day was a reminder of how lucky we are to work on the stunning west coast of Auckland. I personally loved the dynamic between all the cast, we spent a lot of time giggling and pranking each other. On one of the last days I managed to convince Laura that the Sky Tower had special UV drones protecting it which only cameras could see – I couldn’t keep a straight face! When we were shooting at the top of a cliff, all us teens kept pretending to fall off and struggle our way back up to the top, when in reality it was only a one metre drop!

On a career note, is there a genre or any person in the industry (director, actor etc) that you would love to work with in the future?

I have always had a soft spot for period dramas and would love to act in a British drama. Throughout filming Mystic I’ve also come to really enjoy comedy, a little improv here and there. I honestly just feel incredibly blessed to have been given the opportunities I have and adore every character I’ve played.

Is there anything else you would like to share with Tearaway readers about the show as Season 3 is available to watch now?

Expect the unexpected! This season has blown me away – I’ve laughed, cried and snorted in frustration and can only say a massive congrats to everyone involved, and for everyone watching Mystic – I hope you enjoy it!

You can catch Antonia alongside Macey Chipping and Jacqueline Joe in Season 3 of Mystic,
streaming now on TVNZ+.