South African comedian Urzila Carlson has always been a sucker for peer pressure.

Having worked in advertising before her sudden career change, the now fan favourite was dared to take part in an open mic night – and the rest is history.

“I basically got hooked.”

Carlson says her background plays a significant role in the comedy she produces, a style which is more aggressive and straightforward. This “super direct” nature goes down very well with fans, seeing her win Best Female Comedian five years consecutively, as well as Three’s People Choice Award twice at the New Zealand International Comedy Festival.

But that doesn’t mean she advocates for comedic competition.

While Carlson agrees that awards such as the Comedy Guild or People Choice are very special, she believes comedy is too subjective to compare – “what’s funny to one is not funny to another.”

However, although no one comedian is the same, everyone has their inspirations.

Bridesmaids is a common trend when Carlson talks about hers. First Wanda Sykes, then Melissa McCarthy, plus add Kevin Hart and Dave Chapelle in the mix – you have the people who make Urzila Carlson, the woman known for her funny, laugh.

Oh, and of course a shoutout to “the aunties that inspire us and make family get-togethers bearable.” Let’s face it, we all need some of those. The ones who can light up a conversation with a stab of quick wit. 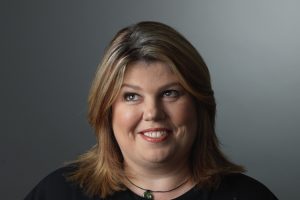 But Carlson changes tone when discussing women in the comedy industry. A subtle feistiness emerges and you realise why she has been on top of the game for so long.

“I think the tide is changing in comedy and I’m not sure everyone has life jackets that will keep them afloat! Bring the water, I say.”

No doubt she is ready for the change in tide. In fact, it wouldn’t be surprising if she had a board on hand to surf the waves.

Consequently, on the issue of local comedy and New Zealand television, Carlson says “it’s also important that it’s not just local for the sake of it. It needs to be well written and put together.”

Without a doubt, Urzila Carlson is a legend of the game. And even more admirably, she continues to surprise, awe and thrill with every new show saturated in hilarity.

Known as the self-proclaimed Lesbyterian, it was at a drunken house party back in South Africa where she got her nickname.

“It warms my heart that people all over the world use it now. We are more than our sexuality.”

Fighting tough not only for women, but also for comedy and a cause far greater than herself – Urzila Carlson is the definition of a hero.

And a funny one at that.

Urzila Carlson will be performing at this year’s New Zealand International Comedy Festival. Tickets to her show, Studies Have Shown, are selling fast so click here to get yours!