The Year in Music, So Far

With three months of the year having already passed by at an immensely alarming rate, I figure I might as well whack out an article to celebrate. Today we look at some (not all, because the world is large, and time is passing by at a rate of knots) music releases from this year that I feel are worth mentioning for some reason or other, and speculate as to what the rest of the year may be like.

Our journey begins with a list of albums I’ve enjoyed so far in this most marvellous of years, which North Korea’s glorious Juche Calendar tells us is actually the year 103. Strip off your corpse paint and put out your torches, black metal fans; Alcest are back and happier than ever.

Alcest take the sounds that initially made black metal so uniquely ugly (tremolo-picked guitars, blast-beats, high vocals at the back of the mix) and make them sound at the very least, beautiful – perhaps even hopeful. With each release, Alcest has changed its formula enough to stay interesting, and on Shelter we see perhaps the most dramatic change in sound yet; the black metal influences on this album are quite minimal.

As a result, Shelter feels like a nice dream in the summertime, where everything is hazy-sounding and filled with positive vibes. Previously, the music of Alcest has had a kind of cold quality to it, despite how hopeful it may have sounded. This is no longer the case. Shelter operates on a dichotomy between laid-back, beautiful music and dense soundscapes.

I would recommend this album to people who are fans of the likes of Sigur Ros, or shoegaze in general. 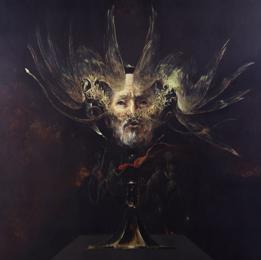 Quite frankly, this album is huge, and I’m struggling to say more than that. If you like some of the more extreme genres of metal, or have been hanging out to hear some more heavy satanic references in your music, I’d recommend checking this out. After the opening track, Blow Your Trumpets Gabriel, you will be well aware as to whether Behemoth is your thing or not. How many decent projects can Chino Moreno possibly be involved in? Regardless of the answer to that question, Crosses is another yet great album of his – under yet another moniker.

Crosses mixes electronic, rock and enough other influences and sounds to have a wide appeal. The general tone is dark, but not enough as to really put off or shock any listeners.
If you enjoy electronic, rock, or just love Chino’s voice, give this album a spin. It’s good.

Have A Nice Life: The Unnatural World Deathconsciousness is one hell of a hard album to follow up. It seems that its reputation has grown exponentially with each day that has passed since its release. Fortunately, Have A Nice Life has not tried to replicate the success of their last album, and have instead created an album that is a great listen, regardless of whether you’ve boarded that hype-train to Deathconsciousness-ville or not.

The Unnatural World is unsurprisingly moody and filled with interesting sounds. One could argue that each song has more direction than anything off theirprevious album. Each song is self-contained and perfectly measured, always leaving you feeling satisfied.

Goodness, it’s quite hard to write about this album without referring to the band’s past (or without going into great detail), but in all honesty, doing so is easily justified. Deathconsciousness just had that big an impact on the underground music scene, particularly through its concept. Perhaps big-time fans of Deathconciousness will feel that The Unnatural World is lacking, and that’s fair enough. But, analysed on its own merits, The Unnatural World is not only great, but also unique.

Check this out if you like depressing-sounding music and/or lo-fi recording.

This album has been my introduction to St. Vincent, and I like what I’m hearing. St. Vincent is almost like a vision of what pop might be like in an alternate world, where learning how to play an instrument well enough to effectively break a few rules, and have some fun whilst doing that, is more important than getting naked and yelling. Seriously, Lady Gaga. What was that?

This album is quirky, fun, and interesting. I’d recommend it to anybody who’s crazy-bored with pop. Don your robe, close your eyes, and relax. SunnO))) and Ulver are here to massage your earholes.

This album sounds as expected, and that’s not a bad thing. Terrestrials doesn’t really aspire to be much more than the sum of its parts, but if drone is your thing, you’ll probably like it anyway.

Thee Silver Mt. Zion Memorial Orchestra: F*&k Off Get Free We Pour Light On Everything I’m willing to forgive these guys for constantly changing their name, but only because of the quality of their musical output. With this album, Thee Silver Mt. Zion have ditched quite a few aspects of their post-rock tag and settled on a very noisy, punky vibe. There are a lot more vocals from Efrum Menuck than you are likely to have heard in anything else he has been on.

F*&ck Off Get Free… sees the band realising a side of themselves that we haven’t heard before, and it’s a very loud side. Turn it up.

Next up, we have a couple of notable releases that have been released to quite a lot of acclaim, that I haven’t had time to digest yet.

La Dispute: Rooms of the House (post-hardcore) is getting mixed reviews. Mixed between good and great, that is. I heard it once and didn’t like it as much as Wildlife, but it could well be a grower.

Animals as Leaders: The Joy of Motion (instrumental progressive metal) is being hailed as potentially the band’s best release yet, which is cool. I haven’t had the chance to hear it, but based on their history (and the very existence of Tosin Abasi) I can safely recommend this album to anybody that likes virtuosity in their music.

Yes, Juche Year 103 has certainly been exciting so far. Now, to wait for my new Swans album to arrive. Apologies if I’ve missed anything substantial, which is entirely possible.