Drake: Crown Me or Kill Me

The crowd is wild at Vector Arena. It is Drake’s first time in New Zealand and these fans have been waiting for him. Even before he touches the stage the audience is going off, shouting out the lyrics to the ‘before show’ rap hits.

Drake emerges to wild screaming, like something from a Beatles concert. He feels the vibe, stopping after only his first song. “I normally save this ’til the end,” he says. “But you are the loudest crowd I have ever played for!”

He maintains this energy throughout his set, getting the crowd more and more worked up with snippets of his six years worth of hits. The whole night he steers clear of full songs, choosing only to perform small pieces of them, packing more songs into his set and setting a frantic pace for the show. 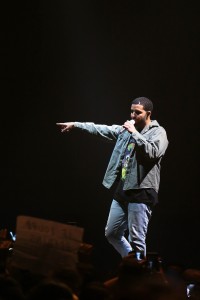 In the first 30 minutes he busts out hit after hit: All Me, Crew Love, The Motto, Headlines, Over, Successful and more.   Eventually he tones the mood back and plays a down-tempo version of Better Find Your Love, before making his way to a podium in the centre of room.

“People were telling me all about kiwis and kangaroos,” he says, before launching into Come Through, “but now that I am here I realise that is just me and you.”

Something about this statement apparently gets Kiwi women going, because as Drake starts the song he notices a bra that has been thrown onto the stage. He picks it up and hangs it on his microphone stand. Then more bras are thrown and his microphone stand starts to look like something out of a Heidi Klum campaign.

Next he plays Hold On We’re Going Home, the only song in his set that he draws out. He gets the audience to sing the chorus again and again. He makes his way back to the main stage as the song ends and starts speaking of his love for our country.

“I love New Zealand. They could pick up this whole place and move it another 13 hours and I would still come. I’d take a 36-hour flight to come here.”

“Maybe we’re not ready to go home just yet,” he teases the crowd, before singing the hook of the song with a subtle change to the lyrics: “Just hold on, I don’t wanna go home.”

Suddenly he brings back the hype rap show with his more recent big hits, 0/100, Started From the Bottom and Worst Behavior.

The show is nearing its end and Drakes asks for the lights to be turned off and a spotlight be put on him, because he wants to talk to audience about what he calls “some real sh*t”.

“I’m just one man, and all of you taking the time out of your week and money out of your pocket to come see me… that is already the best thing ever,” he says, crouching at the front of the stage. One spotlight in the dark arena, the hyped crowd magically silent and feeling the climax of the show.

“I’m gonna go a lot of places after this,” he says, “and I don’t know what’s going to happen. They might crown me. They might kill me. All I know is..:”

Then, without another word, he walks off stage. Despite the chanting he gives no encore.   He already knows he’s a legend.